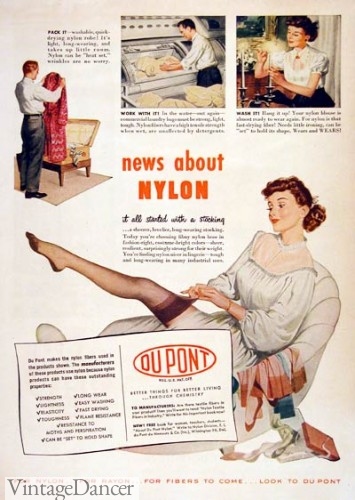 Before the 1940s, women would not leave the house without wearing a pair of silk stockings. In fact, it wasn’t considered appropriate to be bare-legged in public whatsoever unless you were at the beach. WW2 shortages combined with the invention of new materials changed the way women purchased 1940s stockings. Stockings, also called Hose, came up to mid-thigh and had to be held up with garters attached to corsets or girdles. A garter belt could also be worn to hold them up. Before the late ’30s, fabrics weren’t elasticized, so they weren’t very stretchy. Hose were woven into the silhouette of a leg, a process called Fully Fashioned, or on tubular knitters (less common). Sizes were determined by the foot size with plus size (called outsize) stockings available in wider leg fits too.

Once Rayon and Nylon were invented, stockings began to be made from these instead. They looked like silk stockings but without a heavy shine. They were touted as a “new product which will give women sheer, ringless hosiery that will not wrinkle, run or wear out.” While not entirely snag proof they did snag less and run less meaning they would hold up longer than silk, depending on the thickness and type of weave. 1940s hosiery were sheer and nude colored but darker than the skin, and had seams up the backs where fully fashioned styles were sewn together. Seamless stockings came about in the late 1940s but never fully took off in fashion till the 1960s.

Stockings had reinforced toes and heels with a Cuban heel design on most. Cuban heels were a square edge block of darker reinforced knit that could be seen above the shoe heel. While certainly fashionable they were mostly a practical design. 1941 Plus Size Nylons by Lane Bryant During the war any available silk, nylon, and sometimes Rayon were needed to make parachutes, tents and other fine materials. Women were asked to donate their used stockings to the war effort. Once word got out that there might be a shortage of Silk and Nylon stockings, women flooded the stores, buying up all they could thus creating a drastic inflation of pricing. Once the war board stepped in to regulate production and cap prices, demand settled down but they generally were still too expensive for women to afford to replace often. 1940s stockings became a precious commodity. They snagged and tore easily, and it was hard to keep a pair around for a long time. Women had to conserve their stockings for very special occasions, and fought over any that might be available for purchase. For most of the time, they had no choice but to go bare-legged. Women didn’t like this.

To wear stockings, especially with seams, was just part of their wardrobe. Sundays were often the only days women wore their stockings. The government went so far as to ask churches to tell women it was alright to attend without stockings. Drawing on Nylon seams with the help of a friend

To get the 1940s nylon look without hose, women began to stain their legs with brown household items like gravy browning, coffee and cocoa powder to give the appearance of stockings. Soon enough leg cosmetics were developed that stained the legs a tan color – sort of the first self-tanners. The first versions stained dresses and ran off in the rain. Newer versions were better, and came in liquid, cream or powder that was mixed with water. Several different shades were usually offered to complement different skin tones. 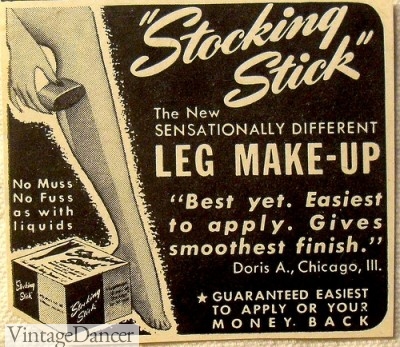 All of the makeup companies, such as Max Factor and Elizabeth Arden, got on board. Some women took it a step further and drew a ‘seam’ on the backs of their legs with brown or black eyebrow or eyeliner pencil, often enlisting the help of a friend to get it straight. After the war, Nylon stockings returned and women went right back to wearing them.  DuPont announced immediately after the war that Nylons would be made again for the public. They had some production issues and underestimated demand so for over a year crowds mobbed stores creating “nylon riots” every time a shipment came in. There was little variety in stockings in the 1940s. The differences were in the minute details. Silk, Nylon, Rayon, Cotton and Wool were the main types of materials. With Silk and Nylon being in short supply, most women chose Rayon or Cotton stockings. Rayon could be high shine like silk, or low shine like cotton. It breathed well and held up nicely against wear. Its one drawback was that it lacked any stretch, making the perfect fit harder to achieve. (I once bought a pair of vintage fully fashioned stockings, and with my small foot but wide calf, they were horribly uncomfortable. They bunched and ripped on the first wear. Thank goodness for modern improvements to hosiery since the 1940s!) There were three main types of textures 1940s stockings came in.

The weight, gauge, or thread count of stockings also contributed to texture. For the day or workwear, a heavy knit cotton or wool stocking was the most practical (similar to tights today.) Heavy “sport” knit stockings were plain or fancy designs of rib stripes or zig zags. Office work and afternoon wear could be a medium gauge smooth Rayon stocking while evening and special occasion wear preferred sheer, almost see through, knits. Stocking sizing came in foot size and three lengths- 28, 30 and 32 inches.

1940s hosiery colors were limited to a few shades of a “natural” skin tones, black and white. Natural colors were called “Beige” for your everyday wear,”Suntones” for a summer sunkissed golden tan, “Taupe” for special occasions which were darker than most white skin tones, often blended with grey threads. Darker colors made legs look thinner. White stockings were mostly worn by children, teens, and women dressing for weddings, certain work uniforms (nurses), or in spring pastel colors. African- American, Carribean, and Latino women whose skin tone was richer than Taupe had the choice to wear any color of stocking they liked. Women could be seen in black stockings, tan stockings, or white stockings that complimented a white or pastel dress. Matching skin tone was not as important as it was for white women. 1940, three ladies going to take their cosmetology exams in dark to light stockings.

Read about 1950s women’s stockings next.

Buying vintage stockings today gives you more options than in the 1940s. Most women don’t bother to go through the authenticity route of buying fully fashioned, seamed stockings, in Silk or Rayon. They are hard to find, and frankly, just don’t fit as comfortably as modern-does-vintage stretch stockings. It also doesn’t make too much sense to wear thigh high stockings vs pantyhose when no one will see your thighs under a skirt or dress anyways. However authentic you decide, here are some places to look for 1940s style seamed stockings: Retro Seamed stockings- My collection of online sources selling vintage style seamed stockings. I do not reccomend black seamed stockings or fancy heel and seam designs- those were not worn until the very late 1940s but more so in the 1950s.

Instead, choose a nude skin tone with a nude or tan backseam. I like to shop at UKtights.com  (ships to UK and USA) for brands Pamela Mann, Cervin, Pretty Polly and Jonathan Aston. The Pamela Mann Jive Seam nude/nude seamed stockings are my all time favorite pair for ’20s to ’40s fashion. They sell out fast so grab ’em whenever you see them in stock.

What Katie Did (UK) and Secrets in Lace (USA) both have mostly ’50s style stockings with black backseams. They sometimes have nude back seams in a range of skin colors.

Amazon has a handful of cheap stockings and tights. The Berkshire tonal tights with nude backseam are a best seller. While tights or pantyhose were not worn in the 1940s they certainly make life easier today.

For winter warmth the Wolford Velvet tights are nice and cozy but don’t have back seams.

Know of other sources? I am always on the lookout. Tell me where you find 1940s style nude seamed stockings in the comments.

Scroll down to read about 1940s socks.

Keeping reading about 1940s stockings below. Socks were not often worn by women before 1940 but white ankle socks were very popular with teenage girls. They were worn with saddle shoes or penny loafers. Colorful socks were an option for both children and women once the war started. They either had a snug knit band at the top or folded over once for a clean and classy vintage fit. Popular colors were red, white and blue, as well as yellow, beige, light blue, stripes, geometric and argyle prints. A few fancy socks had small flowers knit into the design that resembled embroidery. For the most part, socks were practical and not a fashion accessory. During wartime women conserved their stockings and instead wore ankle socks made of cotton to match their dress. After the war, they returned to stockings and only wore socks for sports and casual dress. For young women attending college, ankle socks would not be fashionable enough. Instead, tall over the calf socks with fold-down tops were in vogue. The tops often featured Nordic designs during winter and flowers in summer.  These would be worn just below the knee, usually with the cuff folded back. Many socks were home knitted during this time, with wool yarns a popular choice. 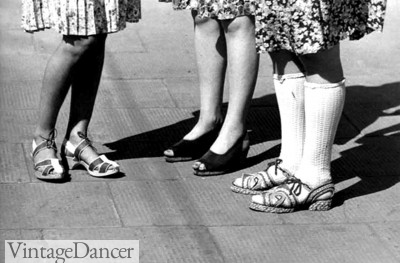 Learn about the history of vintage socks.

We are Debbie and Oscar, your guides to dressing up like decades past. We are here to help you find clothing online and learn about vintage fashions as worn by everyday people, just like you. Need help with your outfit? Ask us anytime.
« 1950s Coats and Jackets History
1940s Plus Size Fashion: Style Advice from 1940s to Today »