The Film Noir genre of the 1940s and 1950s is a popular vintage movie event and costume party theme this year. Dangerous femme fatales and mysterious detectives dressed in black or grayscale make perfect characters for Halloween, too. The look is easy to re-create, possibly with things in your closet or that could easily be purchased. If you have a favorite Film Noir actor or character, by all means, try to emulate their look — otherwise, these women’s and men’s Film Noir outfit ideas should help fit right into the days of black and white movies.

First, the ladies’ outfits. Click here to jump to men’s.

Our first look looks back on the 1940s, when women who meant business wore power suits. Classy, sophisticated, and strong, she was a woman you wouldn’t want to cross paths with.  For her outfit, a two-piece matching jacket and skirt with a modest blouse is paired with a ladies’ fedora type hat, backseam stockings, and heels. I love the purple hues in this not-all-black outfit. While black or greyscale does create a neat effect, consider some darker color shades — the colors the ladies were likely wearing in the movies! 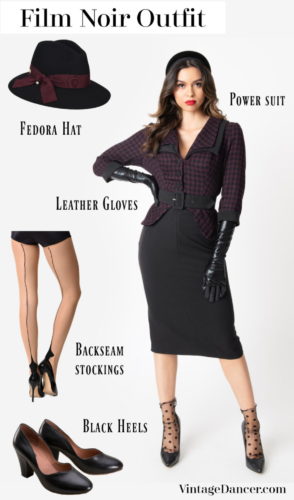 Ah, the innocent lady. She seems like the girl next door, but watch out! Her lips are poison and her hand is never far from the pistol in her handbag.  For her outfit, I would pair a black and white/ivory blouse and skirt together. Her hat is veiled to hide her mysterious eyes. Her shoes have an adorable bow on the toe (a peep toe heel would also be charming), and her handbag is big enough to hide the evidence. Red lips are important for all Film Noir costumes, otherwise makeup should fit the era- 1940s or 1950s. The Femme Fatale is everyone woman’s favorite silver screen character.  She always has at least one scene where her outfit is drop-dead gorgeous. A long sexy black gown layered with a large white fur coat or feather-trimmed robe is over the top and dramatic. Strappy high heels are a must. Long opera length gloves, glittering jewels, and a long stem cigarette holder are the perfect accessories for this luxurious and wealthy outfit. Paired with the men’s detective outfit below is an outfit for a partner in crime-solving mysteries (secretly being part of the crime). She is in all black or grey from head to toe with a large-brimmed hat worn at an angle. Her dress is dark but modest, practical for the tasks at hand. A medium-sized black-handled handbag carries secret documents and stolen jewels. Her shoes are sturdy yet pretty. The final piece is a black trench coat. This sets her apart from the other ladies as one who is on an undercover mission. Neo-Noir encompasses films after 1958, where the storyline and movie lighting lightened up. Consider a white dress or men’s suit with dark accessories instead of the heavy black and grey tones. You could also venture into color films, although even then the clothing remained monotone. Shop 1960s mod dresses and add shoes, handbags, hats, gloves and belts. 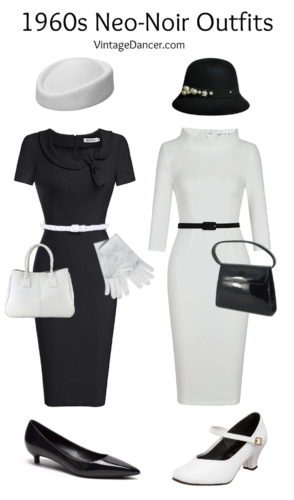 The most iconic of all men in a Film Noir movie is the undercover cop, detective, or private eye. He is intelligent, brave, and gruff when he is confronting the bad guy, and swoon-worthy around the ladies. His grey or black trench coat is actually tan, as were most trench coats of the mid-century. On film, it looks grey to contrast with the dark pants, white dress shirt, and solid dark tie. His unmistakable grey hat with a black band is a wide brim fedora worn angled and low over one eye. Underneath his coat, he wears a gun shoulder holster made of tan leather to carry his .38 special (check for rules regarding fake guns at an event). The final bit is his shoes. Plain black lace-up shoes seem to be the most practical for private investigators flying under the radar. Some of the bad guys wore a black Homburg hat — a signature choice for gangsters, mobsters, and other smart criminals. Otherwise, his dress would have reflected his wealth and type of crime. A 3 piece pinstripe suit, hat, and two-tone wingtip shoes is a classic gangster outfit. A long black overcoat contributes to his frightening demeanor.  Add accessories such as a faux lit cigar / pipe/ cigarette and machine gun. While the above outfits are the most classic Film Noir characters, they are not the only options: 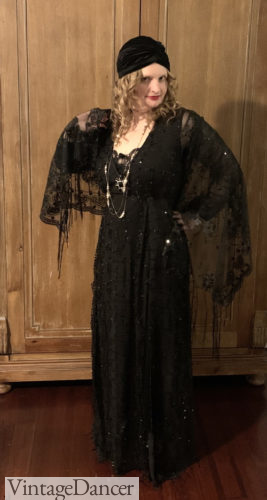 We are Debbie and Oscar, your guides to dressing up like decades past. We are here to help you find clothing online and learn about vintage fashions as worn by everyday people, just like you. Need help with your outfit? Ask us anytime.
« 1880s Fashion Dresses, Clothing, Costumes
1950s Mature Women Fashion, Mrs. Clothing »