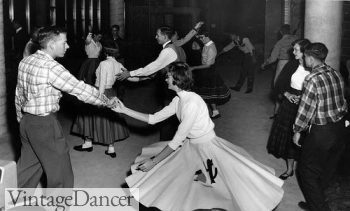 Dancing in a poodle skirt (but that is not a poodle)

A 1950s sock hop is probably the most common event theme of the fifties decade. Visions of teenage girls twirling in felt poodle skirt costumes, white lace socks, and saddle shoes make me want to jump in and dance with them. While the poodle skirt look has been shown in nearly every ’50s movie in every sock hop scene for the last 60 years, it was not the only thing young women wore to a sock hop, nor was it the most popular. Let me show you how to dress for a 1950s sock hop as authentically as possible, poodle skirt or not! Shop poodle skirts here.

For guys, I have some sock hop attire ideas at the end of the article. Click here to jump to men’s sock hop outfits.

1950s skirts were trendy items teens would wear. They could wear dresses, too, but the ’50s were the era of mixing and matching separates. A girl’s skirt matched her cardigan sweater, neck scarf, belt, and bag. Being coordinated was a big deal. Having a big fluffy skirt was an even bigger deal. The bigger the better. Girls would layer on petticoats for maximum fullness or use a hoop skirt, which was bigger and lighter. Hoop skirts, however, had some problems. They were difficult to sit in, prone to flipping up in the wind, and showed visible hoop lines underneath thin cotton dresses.  All of these issues were solved when someone had the bright idea to use wool felt instead of thin dress fabrics. The thick felt made circle skirts easy to sew (no hemming edges), light to wear (only a yard or two was needed instead of the usual 5 yards) and never showed a hoop skirt line. Hallelujah! Teens and women added felt circle skirts to their (mostly winter) wardrobes. They then spruced them up with cute appliques of animals, seasonal themes, and catchy phrases like “See you later alligator.” Adults avoided these cute themes but did decorate their skirts with rick rack, zig-zags, stars, and flower appliques.  One of the original 50s skirts featured three poodles with leashes attached to the skirt band. The ’50s were obsessed with all things French and the French walked small dogs, like poodles.

Skirts were usually paired with a white button-down blouse with round Peter Pan collar.  They could also have pointed collars and come in a range of pastel colors.  Some poodle skirt looks were worn with striped knit tops, sleeveless button-down shirts, short sleeve knit sweaters or cardigans, and long sleeve knit tops or sweaters. The twin set, a short sleeve knit top with matching knit cardigan sweater, is another iconic pairing with ’50 poodle skirts.  Any and all of these 1950s tops would have been worn with skirts to a sock hop.  Learn more about and shop for ’50s tops. Most teens preferred the plain knit top or sweater because they looked best with a chiffon or silk neck scarf. Tied to one side of the neck in a simple knot, they were the perfect accessory! This is the one item 1950s Halloween costume designers got right.  Most scarves were a solid color that matched the skirt or at least the belt.  If it wasn’t worn around the neck, it could be tied around the hair like a headband or around a high pony tail, AKA the 50s cheerleader look.

Speaking of accessories, poodle skirts needed a wide belt. Maybe not needed, but they looked best with a wide cinch belt or shiny vinyl belt that matched the skirt. The belt both nipped in the waist and held down blouses that were prone to riding up. Knit tops and sweaters that were worn over skirt bands did not need belts. Shop 1950s belts here. Moving down the leg, we get to socks and shoes. Socks were white, almost always white, and folded down three times to create a neat cuff around above the ankle. they were called Bobby Socks. Many ’50s costumes include white socks with a ruffle lace edge. I have over 20 clothing catalogs from the 1950s and NONE of them have lace edge socks for sale. I am not sure where this trend originated, but it certainly wasn’t part of the 1950s. Lace socks probably came about in the 1960s, when the “doll look” was in style. My favorite ‘50s socks are Gold Toe thin cotton socks. Wearing shoes to a sock hop was necessary, but dancing in them was optional. Black and white saddle shoes are the most iconic and certainly very popular among teens. You can’t go wrong wearing saddle shoes. Consider other two-tone colors, too — blue, tan, gray, and even pink. Other shoe styles were slip-on loafers (penny loafers) and black ballet flats. Flatties were never worn with socks. Women could wear high heels, but teens could not. That, along with wearing stockings, was a right of passage into adulthood. Shop 1950s shoes.

Poodle skirts aside, most teens wore swing dresses, pencil skirts with tops, or swing skirts with twin sets to a school or church dance. These were usually semi-casual affairs, meaning they weren’t a dress up event, although they look very dressed up in our eyes today. Prom was the most formal 1950s dance. Sock hops were after school / weekend events where teens wore whatever they normally wore to school. Here are some examples: 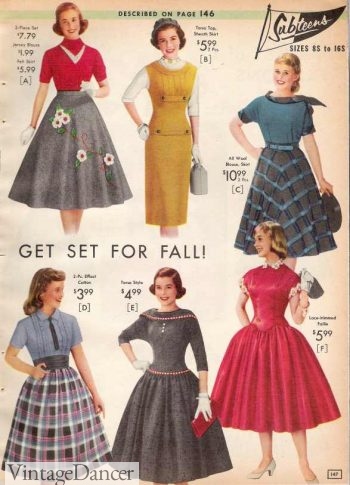 1957 Teen dresses, skirt and top separates and a jumper dress

These are just a few examples of 1950s teen clothing.

You can create your own look using ready to wear 1950s inspired clothing:

Polka dot dresses are very popular 1950s dresses. They would look great on the sock hop dance floor, too. You can choose to wear a petticoat for extra fluff or keep it simple without. Add a wide cinch belt, neck scarf, socks, and saddle shoes.

If you don’t like dresses or skirts, consider a pair of capri pants or high waisted ankle pants and a 50s shirt or blouse.

Shopping for kids? Look at these 1950s girls dresses, shoes, and accessories. 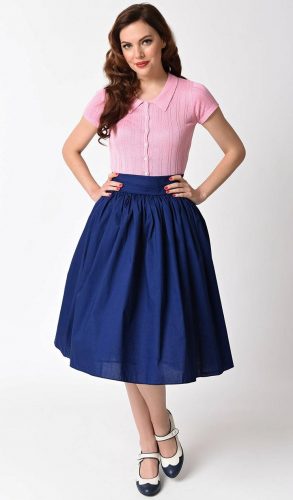 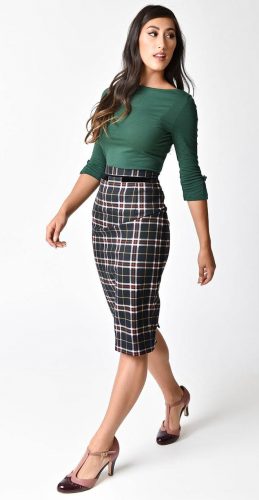 You don’t have to wear a full skirt to a sock hop. Many teens wore the opposite, pencil skirt, to a dance. They were great to do the “twist” in. 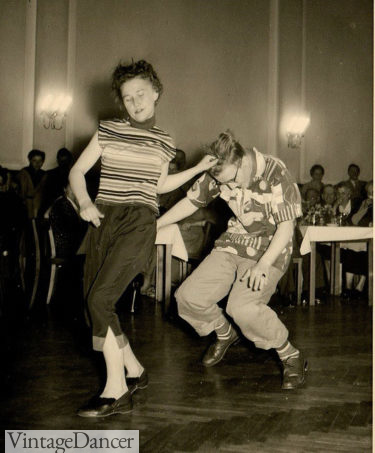 Dancing in a Hawaiian shirt 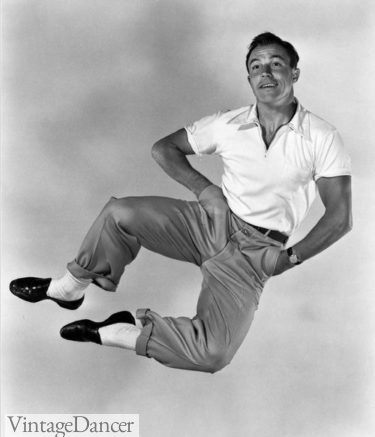 Gene Kelly dancing in a polo short, pants and loafers 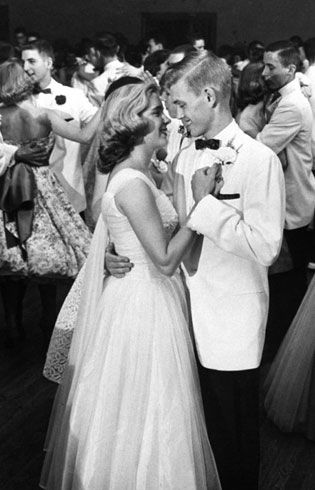 Men have several options for a sock hop ranging from simple and casual to formal tuxedos. 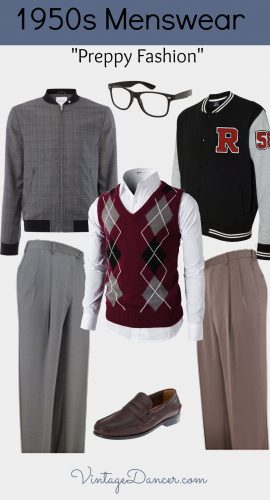 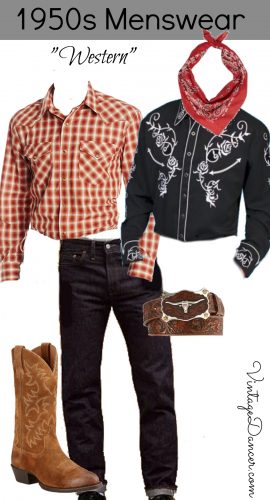 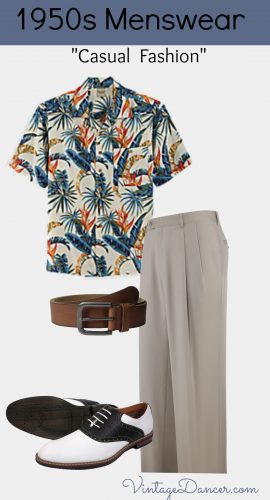 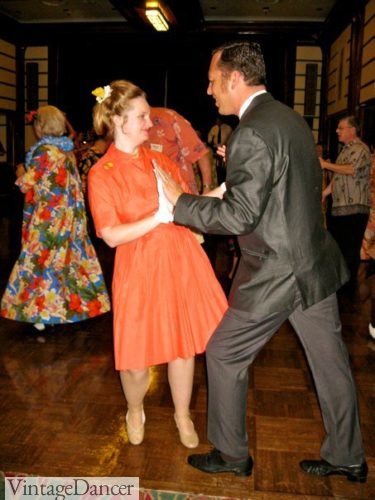 If you need help with your look, just ask!

Here are some Poodle skirts /sock hop outfits to get you started:

We are Debbie and Oscar, your guides to dressing up like decades past. We are here to help you find clothing online and learn about vintage fashions as worn by everyday people, just like you. Need help with your outfit? Ask us anytime.
« Find Civil War, Victorian Boots & Shoes for Kids
Retro Halloween Costume Ideas & Trends »