With the party season approaching, the inevitable search for appropriate occasion wear commences. Retailers are offering a myriad of different styles of cocktail dresses and formal gowns, but equally as acceptable are separates in the form of skirts and tops or vintage pantsuits / jumpsuits. In fact, one of the most common questions we receive this time of year is how to dress for a 1920s, 1930s, 1940s, or 1950s themed event when you don’t like wearing dresses. 1950s hostess gowns made with skirt and blouse separates

Smart separates have many assets to their credit. Separates can integrate smoothly into an existing wardrobe, providing many mix and match opportunities. They may also prove more cost-effective than the purchase of a new dress. A new pair of pants may be worn with a vintage inspired blouse or top already residing in one’s wardrobe.

This article will showcase separates for a vintage inspired style, and evening partywear alternatives to dresses.

Evening styles of the 1920s frequently consisted of highly decorative dresses. These flapper dresses would be cut in the new drop-waist style, exposing the ankles and calves. However, dresses were not the only type of attire available or popular during this period. 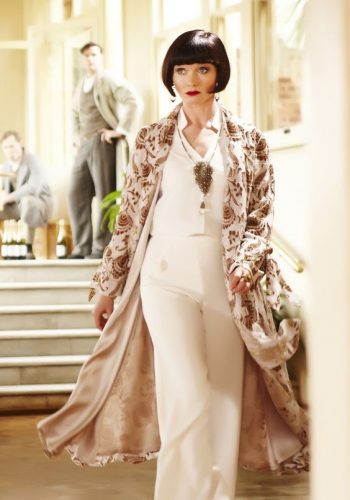 A pair of wide leg pants, modest top and long jacket or wrap is almost dress like and a very vintage alternative to dresses.

Often in the privacy of their own homes, women would wear lounging pajamas. The pajamas would consist of a loose fitting top teamed with matching wide leg pants. While women would not be seen in this type of garment outside of the home (although these pajamas gave rise to the popularity of the beach pajama towards the end of the decade — a garment which was indeed worn outside the privacy of the home) for a modern-day interpretation of 1920s evening attire, a lounging pajama / 1920s pantsuit set may indeed be both acceptable and delightful. Alternatively, add a beaded cape over a plain tunic blouse to add a dash of 1920s inspired style to an outfit.

Shawls and kimono style jackets are also perfectly suited to evoking a 1920s look. Styles featuring beading, surface embellished decoration or bold patterns with long fringe trim would all lend themselves perfectly to a 1920s look.

During the 1930s, separates became more popular, particularly as more women entered the workplace. Sewing magazines would publish features on how to create numerous looks to last the season, using only a handful of patterns and designs. These patterns would be intended to harmonize so as to create a perfect mix and match wardrobe. Create a 1930s style with these vintage inspired skirts, tops and shoes.

In order to make separates appropriate for evening attire, in addition to the cut of the garment, the fabrics played a key role. To create a 1930s style, look out for tactile fabrics with a good deal of drape. Velvets, silks, and rayons would all be suitable, creating a fluidity that is very evocative of the 1930s.

In addition to tactile fibres, shine and luminosity were also key factors in fabrics of the 1930s. This was due to Hollywood movies and costume designers of the early 1930s. Wishing to create depth and tone that would translate on screen over a black and white medium of film, they utilized luminous fabrics such as lamé.

For more information about lamé fabric and to see some examples, click here.

Look here for more 1930s pantsuits/pajamas, blouses, skirts, and shoes. You can sew your own clothing, too.

During the 1940s, fashion became more practical, yet still retained an undeniable air of elegance and style. Gradually, pants started to become more widely accepted. In 1944, innovative designer Charles James released his Bifurcated Skirt – a long skirt made of silk, which separated into pants. Due to the luxurious fabric, this garment was intended for evening occasions. While James’ creations were reserved for the rich and wealthy, the idea of pants as smart attire certainly became more widely acknowledged from the 1940s onward. 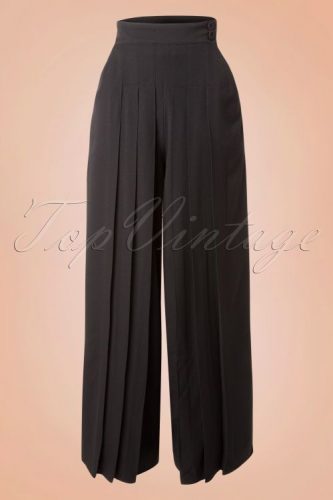 These pants from Top Vintage could easily be dressed up or down, depending on the occasion.

To create a 1940s style with vintage reproduction clothing, opt for loose pants worn on the waist. Alternatively, an A-line skirt finishing on the knee worn with a printed blouse would also create a fabulous 1940s look. Glitzy embellished tops were also quite glamorous such as these examples.

Due to the rise of costume jewelry, accessories could play a key part in the overall look of an outfit. For 1940s style, accessorize with a turban hat – perhaps with a brooch pinned onto the front for extra impact. The 1940s were the decade of make do and mend, so use this ethos to create innovative, stylish looks. Top Vintage have some great separates for a vintage inspired style, including this beautiful 1940s blouse.

Fortunately, many vintage inspired clothing brands focus on the 1950s. From full skirts worn with petticoats to slender pencil skirts, the choice is ample. For feminine styles, a full circle skirt made of satin or brocade would perfectly create a mid century look. For styles evocative of the popular Sweater Girl look, opt for a close-fitting jumpsuit or a pair of Capri pants. Wearing a split skirt over capris creates the iconic Hostess gown, made popular by Lucille Ball in I Love Lucy.

Bold novelty prints were popular during this era. Consider choosing a full circle skirt to showcase an unusual print or design.

Whichever era you may prefer, there are plenty of options to create an evening style with vintage pantsuits, jumpsuits and versatile separates. And of course, the beauty of separates is that you can mix and match them with other pieces, creating new and fresh styles each time you wear them!

We are Debbie and Oscar, your guides to dressing up like decades past. We are here to help you find clothing online and learn about vintage fashions as worn by everyday people, just like you. Need help with your outfit? Ask us anytime.
« How to Make a Titanic Dress on a Budget
Vintage Style Sweaters, Cardigans and Jumpers »