In this new series, I will be showing you how to recreate vintage looks and styles using items available from the retailers of today. The further back in time we go; unfortunately, the difficulty of finding original vintage pieces increases proportionately. This fate is even more apparent with ‘daywear’ – items that would have authentically been worn during any given time period for people to go about their daily business in.

Few examples of clothing of this kind are freely available to the vintage enthusiasts of today, leading to the popularity of vintage reproduction clothing retailers.

In this first article; I shall focus on recreating the styles of the 1920s using the popular television show Miss Fisher’s Murder Mysteries as inspiration.

In Miss Fisher’s Murder Mysteries; the sassy female detective Phryne Fisher effortlessly uses her charm and wit to solve a host of various crimes, all whilst looking impeccably stylish. Phryne favors loose flowing layers of fabric, long coats and occasionally trousers (which would certainly have been daring at the time). As Phryne is a wealthy aristocrat (hence her full title The Honorable Phryne Fisher), of course, her wardrobe choices may not reflect the majority of people at the time.

For this style, think comfortable loose layers in harmonizing tones. Flowing trousers would not have been generally worn by women in the 1920s for daywear, although they would be worn as loungewear during this time. In the 1920s, daywear began to be more practical, and dare we say it, comfortable to wear. After the First World War, clothing started to focus more on facilitating movement, rather than restricting it. Sportswear and leisure wear started to become fashionable, especially with the advent of new fabrics and the desire to don a ‘sun kissed complexion’.

Designers started to produce ‘ready to wear’ collections, which meant that fashion was becoming more readily available to a wider audience. The cut and style of the clothing was very simple, clean sweeping lines dominated. However – the fabric itself was where the design details lay. Beading was a popular fabric embellishment during the 1920s. Get the look with this fabulous dress by Unique Vintage, headpiece, necklace,  brooch, and shoes.

For evening wear, dresses would be adorned in tiny glittering beads, each hand sewn. During this time a new fabric technique became popular – devoré. This technique utilized velvet fabric in such a way as to remove selected parts of the pile of the velvet to create pleasing designs.

This dress (above) by Unique Vintage is perfect for recreating a 1920s evening wear look. The beading details, simple clean cut and knee length recall Phryne’s dress wonderfully. Pair with low T-strap heels – these Zappos heels look the perfect height for dancing the night away in! Add adornment with glittering jewelry. This brooch from 1928.com could be pinned onto the waistline to mimic Phryne’s, and to draw attention to that all important era defining waist level. Add some opulence to your outfit with a beautiful shawl in sumptuous fabrics. Tiara, Shawl, Dress, and shoes.

This dress (above) from Modcloth is another great example of a 1920s style evening dress. The hemline would hit just below the knee, with the tassels swinging and swaying with any movement. With the opening of Tutankhamen’s tomb in 1922, this led to a craze for Egyptian symbols. Many shawls were embellished with Egyptians motifs and symbols, similarly, this craze spread into jewelry design. Geometric lines and symbols were also popular during this era, and were to continue dominating fashion through to the next decade.

Although the general silhouette of the 1920s is thought of as a svelte flapper girl, there were in fact two different styles that dominated the decade. During the early 1920s, ‘Robes de Styles’ were popularized by designers such as Lanvin, Patou and Lucille. They featured a low waistline, with a broad full skirt sweeping to mid calf. They were extremely feminine, over-decorated and almost doll like in appearance. In contrast, the ‘Garconne’ style was much sleeker, allowing for ease of movement and a greater level of practicality. This style later gave way to the sleeker typical 1920s lines that we think of today. Separates became more popular in the 1920s, the jumper-blouse first started being worn (a style we would recognize today as a loose jumper or sweater). Cardigans also started to be a popular daywear outfit component, worn loose and long almost like a jacket.

Here (above) we see Miss Fisher wearing a smart daytime outfit, featuring a blouse with matching jacket and skirt. This blouse and skirt from the House of Foxy could be appropriate for a late 1920s or early 1930s style. The blouse with it’s sailor style collar gives a nod to the nautical fashion influences of the 1920s, whilst the skirt worn with a long cardigan could be styled to evoke the fashions of the 1920s. Dot’s wardrobe demonstrates excellent daywear worn by the working class of the era while Miss Fisher glams it up in fancy dress and coat. Hat, scarf, gloves, dress, jacket, and shoes.

Miss Fishers maid, Dot; gives us an excellent example of what women of working class would have worn during this time. Here we see Dot’s costume in remarkable contrast to the decadence of Miss Fisher’s attire. Dot wears a simple but pretty day dress in a neutral shade. Recreate the look with this day dress from LaVieDelight on Etsy, paired with two tone oxford shoes.

Again, we see Miss Fisher in luxurious layers, complete with matching accessories. Accessories played an important role in the wardrobe of the 1920s woman. Just as they played an integral role in the 1920s, today they can help you to achieve an authentic vintage look. 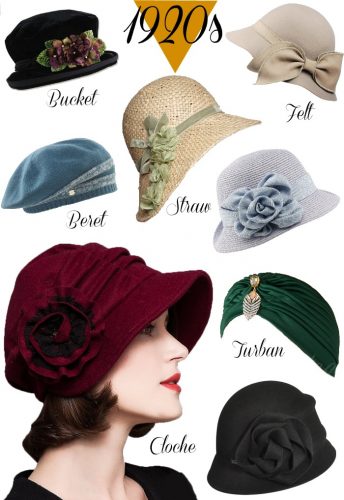 The Cloche hats were the hat of the 1920s. Worn low over the head, they harmonized with the new garconne hairstyles of the era.

Many women sported short haircuts, either in bobs or shingle cuts. The hair could be worn straight, or fingerwaved underneath the fashionable cloche hat. The women that resisted cutting off their locks wore their hair pinned in a faux-bob style.

Hats were minimally decorated with a simple cluster of flowers or feathers to one side. Art Deco inspired ribbon work or felt shapes also adorned hats in the later years. Miss Fishers hats were all handmade by the costume department however the cloche hat style is easy to purchase today.  Many cloche hats come with simple decoration already.  If you must have one of miss Fishers hats seek out a custom made hat from one of the talented haberdashers on etsy. com

Here are a few tips to create your own 1920s inspired look which you may find helpful:

We are Debbie and Oscar, your guides to dressing up like decades past. We are here to help you find clothing online and learn about vintage fashions as worn by everyday people, just like you. Need help with your outfit? Ask us anytime.
« Vintage Bridesmaid Dress Ideas by Decade
1940s Men’s Fashion, Clothing Styles »