I mentioned in my last article that I was up to my eyeballs in Halloween related madness. It has been fun seeing what Halloween costumes are new for 2018, especially which ones are inspired by vintage or retro decades (there are many!). I have spent the last few weeks updating the following articles with many of these new costumes for 2018. Even if you don’t plan on dressing up for Halloween, they may inspire a look for your next vintage event. I have my costume picked out and it is one I can wear to many vintage events in the future. I just love costuming!

Alice in Wonderland, especially the Mad Hatter, is back on trend this year. Both men and women are dressing in colorful pants, clashing vests, and quirky top hats for a Mad Hatter and March Hare theme. The Queen of Hearts is another popular costume. Although Alice in Wonderland is not strictly set in Victorian times, the costumes do borrow a lot from the era. You can mix Victorian era clothing for a unique Mad Hatter themed costume or buy a costume ready made for women and for men. Steampunk clothing also is a big trend, although it is not specific to Halloween. Hips and Curves (Plus Size lingerie & costumes) released their Halloween photo collection and most of it was Steampunk themed.

There are some new things in the Steampunk clothing world for 2017. Metal sunglasses instead of goggles is one of my favorites. Steampunk coats, shrugs, and jackets seem to be big this year too. For men, corset vests and cargo pants and making statements. The look is less fussy Victorian and more gothic streetwear. The costume stores have plenty of options, too, and I am surprised to see the quality isn’t too bad. I may pick some up on clearance after Halloween. Hocus Pocus, The Sanderson Sisters. Millennials are choosing the trends this year with a lot of returns to their youth, when the Hocus Pocus movie was released. The costumes are inspired by 17th-century witches, but with a more colorful twist.

If you prefer a classic witch costume, perhaps the Wicked Witch from the Wizard of Oz, Glenda the Good Witch, Sam from Bewitched, or a 50s inspired pin up girl witch is more you? There are a TON of witch costumes on the market and each witch costume takes inspiration from a different decade.

Vintage Witch Costumes for every Decade

Mary Poppins continues to be a classic. With the Mary Poppins Returns movie releasing soon (set in the 1930s), I expect both the original 1910s and new 1930s Mary Poppins costumes to be big hits. For men, that means Bert as a Chimney sweep or in his striped “Jolly Holiday” blazer will be a popular costume as well. Oscar and I, having just had our 3rd baby, didn’t plan well for Halloween last year, but we managed to create Mary Poppins costumes with stuff we had in our closet. A lot of adults stopped us to say they knew exactly who we were, and that is the best compliment we could have asked for. Flappers and gangsters continue to dominate the 1920s costume market. That’s nothing new. There are cheap flapper costumes to glamorous beaded beauties to choose from. For men, there are pinstriped gangster suits for cheap, although a new to you 20s suit would look better. For women, you too can wear a gangster costume inspired by menswear with wide leg pants, a 20s blouse with bow tie, suspenders, and a newsboy cap. A big trend for kids and teens this year is everything Harley Quinn, the DC Comics supervillain. She is the Joker’s other half and dresses like a vintage court jester. Red and black are her colors, but in the 1920s, classic black and white would have been more popular. People in the 1920s were obsessed with living in the 17th century. They went to many Halloween parties dressed like courtesans, jesters, and clowns. Do a Pinterest search for 1920s vintage costumes and you’ll see many examples of these costumes. For 2017, there are many evil clowns, classic Pierrot clowns, and good and bad jester costumes to choose from. It may not be an obvious 1920s costume, but armed with a little vintage trivia you could be the talk of the party! Old Hollywood monster movies are always a classic Halloween costume. For women, Bride of Frankenstein is a biggie, and for men, Dracula / vampire is a classic. The Mummy returns with new options this year. I have seen Victorian mummies, ’20s mummies, ’30s mummies, and some ghosts, bats, and werewolves. The idea for these costume is not new, but the styling can be shaped from any vintage decade. Take inspired from these 1930s inspired classic costumes for women and for men. It is no surprise that most vintage comic book characters are trending Halloween costumes this year. Wonder woman is naturally a great choice for women, and her costume can be interpreted from 1940s onwards or back further to the current movie set in 1914. Personally, I love her and Steve’s “normal” clothing in the London city scenes more than her battle armor. For a 1940s take on her costume, look at this article.

Green Hornet, Superman, Dick Grayson, Captain America, Aquaman, and Green Arrow are just a few men’s comic book characters that have roots in the ’40s.  Join the superhero trend this year and be at home in the 1940s. A longer skirt makes this more like 40s Wonder Woman

I was a little amused while searching for vintage costumes that “old costumes” came up as an alternative search term and within it a whole bunch of “old men or old woman” costume and makeup ideas.  Is this really a costume trend? Apparently it is, and what better way to dress old than in your vintage clothing? Add grey hair, some wrinkles, reading glasses, a cane, and you are set! 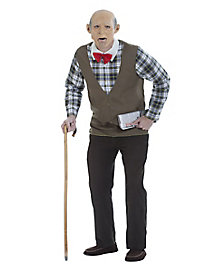 Any of the characters from Grease are classic 50s costumes. I see a little more interest in the fringe characters rather than the main ones. Who is your favorite Grease character? 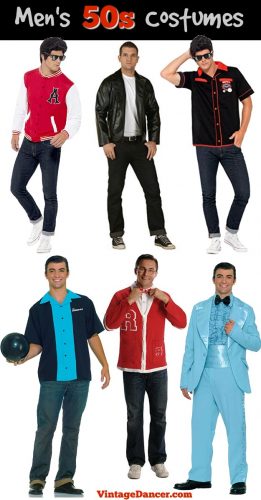 There must be a disco dancing revival going on, because the sheer number of 1970s Disco themed clothing is crazy! I have had the request for help dressing like people in Saturday Night Fever and Studio 54. Sequin jumpsuits or gold or silver shiny shirts paired with bell bottom or flared pants make up the majority of 70s disco clothing for women and men. The current 70s fashion trends lean more towards boho or hippie. I’m having a hard time finding 70s repro disco clothing. Your best bet is to get a ready-made Disco Halloween costumes. The other popular 60s or 70s costume is the hippie outfit. The hippie fashion movement began in the late 60s with earth tone colors and folk-art designs. It continued into the 70s, layering fringe vests and suede jackets over high waisted bell bottom jeans with a wide belt and tall platform shoes. There were boho hippie peasant dresses, tie-dye T-shirts, and jumpsuits too. Because of the current 70s revival, it’s easy to dress in hippie style today. For a more costume look, try one of these Hippie costumes.

I associate pop art with the 60s, but it really was a brief 50s art movement. Imagine comic characters coming to life but still looking 2D — including the dotted newspaper they were printed on. The clothing is easy- polka dot dress, skirt, or pants for women, a colorful mod suit or blazer and pants for men. Add dramatic black line makeup and polka dots to wherever skin shows. This is a really fun costume! Food, especially candy, is being turned into more pop art, mod inspired costumes. What makes them ’60s is usually the short shift dresses, tall go-go boots, and bright colors. Many costumes come with adorable candy or fruit hats too. They really look like something we would have seen in the ’60s. Candy or Fruit with a 60s Twist Are you dressing up Retro for Halloween?

We are Debbie and Oscar, your guides to dressing up like decades past. We are here to help you find clothing online and learn about vintage fashions as worn by everyday people, just like you. Need help with your outfit? Ask us anytime.
« How to Dress for a 50s Sock Hop
Vintage Flats – History & Pictures »