In 1939, Gone with the Wind came to theaters with amazing success. Suddenly, fashion turned back in time to the Victorian age, especially formal gowns and dresses, which embraced fitted bodices, puffed sleeves (or sleevelessness), and large full skirts. The economy still wasn’t very good, so the 1940s compromised and blended Victorian style with budget-friendly design. The result is classic, pretty, and simple 1940s formal gowns and evening dresses that teens wore to prom and women wore out to a fancy dinner with dancing. Eveningwear was one thing that still had glamour in the ’40s. Sequins and beads were not rationed or restricted and were put on everything. Dresses and gowns were simple but shiny and did tend to be more on the casual side than anything in the decades before or after. 1930s formal gowns were long, sleek, and sexy – the basis for most modern formal wear today. 1940s formal dresses were usually made from rayon taking the form of jersey, taffeta, or crepe and fastened with metal zippers or small buttons in the back. Black was the most popular color, but pinks, reds, and blues were often used as well. 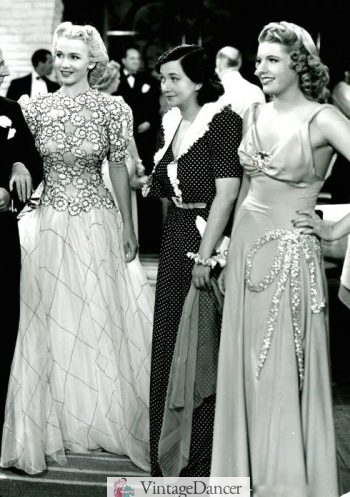 The princess ballgown was inspired by Gone with the Wind. The very full skirt of the Victorian age was reduced to long, semi full A-line skirts in the 1940s. A petticoat was worn underneath to add fullness, otherwise skirts were simply cut wide, pleated at the waist, or layered in tulle. Later in the 1950s, skirts shortened and expanded even wider with the use of multiple petticoats and hoop skirts. The princess bodice revealed more upper chest, neck, and shoulders than most 1930s gowns. These required women to wear strapless bras and bra/girdle combinations with low backs.  Many dresses featured drop sleeves hung around the shoulders, which was a common style among Victorian ballgowns. Most modest designs had short cap sleeves or fuller puff sleeves that were common on 1940s day dresses, too. The princess ballgown was the most popular style for teens attending a prom. The prom dance was a relatively new invention in the late ’30s and ’40s, and teens made extra effort to wear their best dresses to the dance. 1948 Girls Getting Ready for Prom

For many brides, the princess gown was perfect for a wedding (and still is!). Prom or Wedding. The Ballgown was versatile.

Here’s a video showing 1940s teen fashion at a prom or party (and dating tips too):

The 1940s Formal Gown and Jacket One evening look during the ’40s was the long gown and dinner jacket. It was a more grown up look than the princess gown. The gown was a column shape, long to the floor and straight or lightly gathered. It was usually plain or had beading or sequins at the neckline. A dinner jacket, fitted and usually short (to the waist), was worn on top of the dress. The dinner jacket was decorated with sequins and beads, either all over or down the front, and had square shoulder pads. Buttons on dinner jackets were often decorated themselves with beads or rhinestones. A bolero jacket was also worn a lot as a dinner jacket. These were short, coming only to the waist, with rounded edges at the front. They would have similar decorations and would close with a button at the top or middle or could be left open. Formal couple- She is wearing a two piece top and skirt Because of the War, wearing a long expensive ballgown wasn’t an affordable option for many. Instead, semi-formal dresses, based on day and afternoon dress and suit styles, were upgraded with material and style. The overall look was clean and sophisticated. Every woman had one of these “going out” dresses in her wardrobe, even if she didn’t have a fancy gown.

Semi-formal evening dresses, also called cocktail dresses, were worn shorter, just below the knee, with a similar flowing skirt. Skirts were often draped, ruched, wrapped, and gathered. They could have thin straps, but often also had short or ¾ length sleeves with wide shoulders. If the dress had sleeves, it most likely had the ever-present sharp ’40s shoulder pads. These dresses often had shirring in the waist, one panel on either side or in the bust. They also often had a cross-wrapped bodice with draping that took on the look of Grecian goddesses. Evening dresses were usually modest and high-cut in the neck, similar to day dresses of the time. 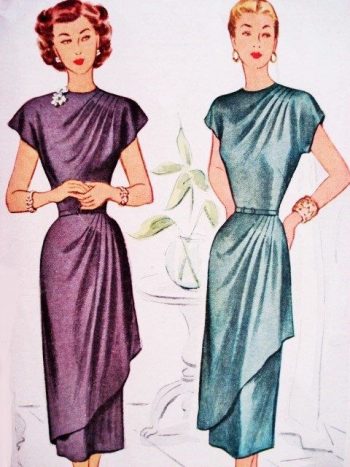 The beauty of 1940s formal dresses was all that was needed for a night out. Many women did choose to accessorize their gowns with long black or white gloves.  To keep warm, a fur stole was frequently seen on movie stars and in high-end fashion magazines. A shawl of the same material as the dress was a less costly alternative to furs. Jewelry was minimal as well, if worn at all. A high neck beaded or rhinestone necklace in single or multiple stands was the most popular. A pair of sparkling earrings was a must, although the design should not overpower the dress. Some semi formal or cocktail dresses may have had a fancy brooch worn instead of a necklace. Learn more here. Shoes were usually simple pumps, without straps or ornamentation of the toe box. Black was the standard color, although a light color dress would need lighter shoes. Heels were a bit thinner than daytime shoes which featured sturdy Cuban or military heels. Long dresses usually touched the floor hiding any evidence of shoes altogether. Shorter cocktail dresses revealed more of the foot so shoes tended to have a bit more style such as an ankle strap. Shop 1940s style shoes here. Patterns for a 1940s Formal Dresses

Prom season each year brings vintage lovin’ gals out shopping for a 1940s vintage or vintage inspired prom dress. Other than big puffy ballgowns that look more ’50s than ’40s to me, the selection is a bit limited. Most ’40s formal dresses had sleeves, while most modern gowns are sleeveless. Often, the best 1940s prom dress selection is either grouped with “modest” prom dresses or with “mother of the bride” formal dresses. As I am browsing for new gowns to add to the 1940s formal/prom dress shopping page, I find myself adding the same ones to the 1910/Titanic era shopping page. The reason goes back to the Victorian style being an inspiration to ’40s gowns. The crossover between these two eras is very similar.

Another popular option for mature women who want an easy sophisticated formal dress is the two-piece ballgown skirt with a coordinating blouse or jacket.  These styles are timeless. I also favor long sleeved velvet dresses or illusion top (see-through) gowns which provide modest coverage.  Add gloves, jewelry and heels for a complete outfit.

For semi-casual affairs and cocktail parties, the short cocktail dress is much more affordable and easier to find. I look for black or dark colored knee length dresses with a slender fit (not tight) in rich fabrics like taffeta, velvet, or heavy cotton blends. Sleeves are a must in any length. Modesty up top is also critical.

See some ’40s outfits I have put together here, including cocktail and formal dresses.

We are Debbie and Oscar, your guides to dressing up like decades past. We are here to help you find clothing online and learn about vintage fashions as worn by everyday people, just like you. Need help with your outfit? Ask us anytime.
« Vintage Men’s Outfits -1920s, 1930s, 1940s, 1950s
1950s Men’s Fashion History for Business Attire »