Now that the weather is finally starting to warm up, it may be time to think about vintage summer clothes — especially beachwear. Aside from swimwear, clothing styles suitable for the beach span many varieties. Vintage summer clothing includes rompers, jumpsuits, beach pajamas, playsuits, sundresses, and versatile separates. Women Wearing Sailor Style Outfits at the Beach, Circa 1930s

As it gradually became more acceptable for women to be participating in sports and physical activities, the demand and necessity for appropriate beach clothing became apparent. The evolution of beachwear really began when women were able to actually swim in the sea, rather than simply bathe.

By the mid 1920s, women wore swimsuits that allowed them to swim. Admittedly, the fibers still had a way to go in order to become the streamlined, water repelling styles we are familiar with today. However, this was still an important sign of development, both for fashion and for women’s social progression.

Also during this decade, people enjoyed leisure time at the beach, and it became extremely fashionable to do just that. The wealthy enjoyed holidays on the French Riviera. They donned the latest styles in a display of their wealth and social standing. Hollywood movies frequently were set on cruises, perpetuating the beach- to vacation- wear trend. Playsuits and Summer Styles From the 1950s. Beach pajamas suddenly became extremely popular in the late 1920s and 1930s.  These pajamas derived from actual women’s day pajamas. Women wore day pajamas to lounge in whilst concealed within the inner sanctum of their homes. This jumpsuit from Modcloth is perfect for recreating a beach pajama style. Add a sun hat, scarf, beach bag, sunglasses and sandals for a head to toe summer look.

Not surprisingly, as beach pajamas derived from lounging pajamas, it was somewhat shocking for women to wear beach pajamas outside the home. This shock value only added to the allure of the beach pajama, and a craze was born. New for summer, these beach pajamas from the House of Foxy are wonderfully authentic!

By the mid 1930s, the shock value of the beach pajama had decreased slightly, thereby encouraging even those with a timid disposition to sport a pair. Examples of 1930s Beach Pajamas. Big Prints and Bold Colors made a Statement at the Beach Beautiful Beach Styles from the 1930s

Of course, beach pajamas are not the only kind of attire suitable for the beach. By the mid to late 1930s, playsuits became popular. These comprised of a fitted bodice with adjustable straps. Many had matching overskirts that could be easily be removed.

Women’s waists were defined, with shorts skimming the hips and flaring out to a mid thigh hem. Interestingly, even though women were wearing these vintage beach clothing styles created specifically to facilitate movement and sporting participation, this quote alludes to different reasons:

Popular fashion magazines of the period encouraged women to look their best at all times. Even though clothing designers may have been creating styles suitable for sports, many women were wearing these styles purely due to the fashionable significance. 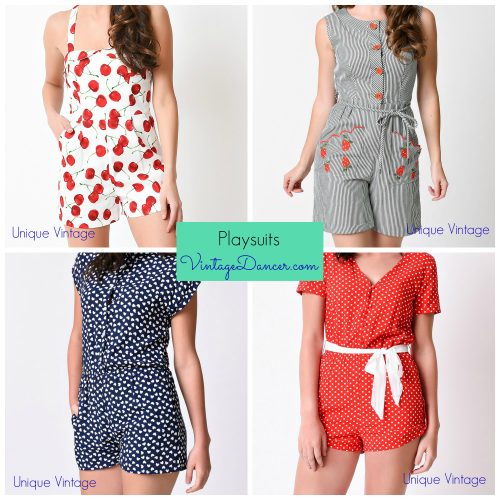 Choose from this selection of playsuits (and more!) for a perfect summertime style.

By the 1950s, playsuits had become more fitted to the figure. The 1940s-1950s romper featured a fitted bodice and was sometimes strapless, teamed with figure hugging shorts. 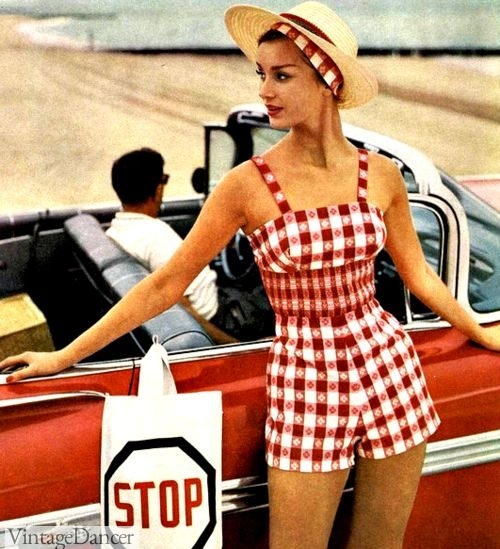 A fitted playsuit from the late 1950s.

Coordinating sets became increasingly popular. Women owned sets often comprised of a skirt, playsuit, jacket, and scarf, all of which may have been made from the same fabric. Palazzo pants are recognizable by a fitted waistline with copious amounts of fabric, thereby allowing the trouser legs to be extremely full. The fabric is usually lightweight — cotton, silk or rayon prove preferable choices. Again adapted from the pajama, the palazzo pant is an extremely comfortable, loose fitting trouser. Women started to wear palazzo pants from the late 1920s, with their popularity continuing into the following decade. Many beach pajama sets comprised of palazzo pants with a matching top.

As some beach pajamas were worn as ‘all in ones,’ the palazzo pant often proved more versatile. Women could wear the palazzo pants with many different tops, thereby proving an adaptable wardrobe addition. Wonderfully wide palazzo pants to be comfortable and stylish whilst in the warm weather. Shop 1930s style wide leg pants Shorts are always a popular choice of attire in warmer months. During the 1930s and 1940s, women wore shorts high on the waist, flaring out over the hips and usually ending at mid thigh level. This cut of shorts is still popular today, due to the highly flattering style.

Women could wear shorts teamed with a matching sun top, or a lightweight cotton blouse tucked into the shorts’ waistband. Alternatively, wide leg trousers teamed with a loose top would also prove a popular vintage beach clothes style. In the 1940s, summer skirts were full (although not as full as the following decade). The fabric of the skirt was pleated or gathered onto the waistband to create slight movement. Skirts made of fabric featuring bold prints and tropical patterns were popular, thereby helping to create a summertime holiday mood.

Sun skirts often featured buttons through the center front. Women often wore these skirts as a set, to be worn over shorts teamed with a coordinating top. Jumpsuits in the 1930s and 1940s were similar to the playsuits of the time. Often sewing pattern companies would release jumpsuit patterns, with an option to shorten the trousers to shorts, thereby creating a playsuit. These vintage inspired jumpsuit styles will keep you looking stylish in the warm weather. Shop 1940s style jumpsuits and overalls.

At the time, they may have been referred to as dungarees rather than jumpsuits. These dungarees would have been made from a medium to lightweight denim fabric, sometimes printed with stripes or nautical symbols. When made of denim, the name used more often in the USA was overalls. As mentioned previously, some sun dresses were made as part of a coordinating set. These sun dresses would usually be fairly short, and would be worn over a matching playsuit or pair of shorts. Dresses were a popular option for summertime dressing. From the 1930s through to the 1950s, some sun dresses came with a matching bolero jacket. This little cropped jacket coordinated with the dress beautifully, and also served the important purpose of keeping the shoulders covered from the sun’s rays. Finish the look with sunglasses and a handy tote bag to keep essential sun cream in. Now you are ready to enjoy the sun at the beach!

We are Debbie and Oscar, your guides to dressing up like decades past. We are here to help you find clothing online and learn about vintage fashions as worn by everyday people, just like you. Need help with your outfit? Ask us anytime.
« 1950s Tops: Shirts, Sweaters, Jackets History
Vintage Summer Hats , Sun, Straw Hats 1930s, 1940s & 1950s History »