What is in your closet? The number of clothing we have today is massive compared to the limited wardrobes in the 1940s. With smaller incomes, higher quality clothing, less variety of clothing, and more home sewing skills, the pre-fast fashion years were one of careful planning and dedication to wearing clothes out completely.

So, what was in a 1940s capsule wardrobe? How many clothes did men and women need to purchase every year? How should I build an authentic 1940s clothing plan? The difference between classes – working farmers vs. middle class city families in the USA- was surprisingly little. More income only meant spending more on clothing items, not necessarily buying more of them.

The exception was young, single women, who spent more on dresses, shoes and hats every year than any other age group. Upper classes also bought more variety of clothing, specialty clothing (Sports), and formal wear. Men’s 1940s clothing usually cost more than women’s, but lasted longer and was purchased less often. Working classes spent more time sewing and repairing clothing at home, a task required even more so during Wartime. “Make do and Men” was the moto of the decade.  Men’s clothing was almost never homemade during the 1940s except for knitwear like socks and sweaters. Clothing was replaced only as needed, not because the fashion trends changed. Most major garments like dresses and suits were purchased every 2 years. Clothing was also repaired, cleaned or shaped (hats), which also took a bit of the clothing budget each year.  High-use items such as hosiery were purchased frequently throughout the year.

Underwear, however, was not replaced as often as I expected. Men and women only had a few pairs in their drawer at a time, possibly re-wearing them several times before going to the wash. They were made significantly better and lasted longer than our underwear today, but still, I’m a little grossed-out. Of the capsule lists below, there are some items missing. Specialty sportswear was purchased by the classes that could afford it, but never made it to these lists. Certain styles of clothing such as a specific jacket or type of negligee might have been lumped into a general category.

Women’s lingerie, too, had so much variety and personal preference that the lists are generalized and not very specific. Clothing for special occasions such as travel, weddings, summer vacations, and school uniforms are also missing. Late 1930s swimsuits. Notice more raching at the bust, wider skirts, and a bit of tummy showing in the upper right. The final things to note about these lists is that most are compilations of clothing that were purchased each year (or every few years). A person certainly had more than these items in their wardrobe at any given time. Everything was worn until it was no longer usable.

For example, a man’s new hat was saved for special occasions and his old hat became his working hat. A woman’s old street dress became a house dress before it was eventually made into an apron or children’s clothing.  Hats were re-trimmed. Shoes were re-soled and heels replaced several times a year. Many smaller items were never purchased because they were given as gifts at Christmas. On to the wardrobe lists!

The 1940s put the world back at war with wartime restrictions and limitations. Once again, women and men had to make do and mend what they had, wear uniforms, shop frugally, and sew more from scratch. Only 10% of income was spent on clothing. Less was spent on lingerie or specialty items like raincoats.

Free clothing such as floursack dresses and aprons helped stretch a budget. Church charity bins were necessary places to shop for the struggling family.

A moderately priced and purchased dress was expected to last 1.5 to 2 years. Poor women mended more often instead of replacing clothing, expecting good dresses to last 2-3 years before being recycled into aprons and children’s clothes. 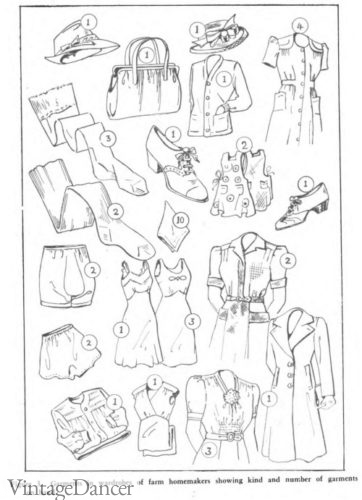 These would be a mix of purchased, handmade, and up-cycled garments. Also a mix of seasonal items. Notice that there are no pants. These would have been inventoried under her husband’s clothing count because she would “borrow” his pants, overalls, gloves, and rubber boots to do farm-work. Otherwise, she did everything in a house dress and apron. Watch this video reel with examples of a housewife’s wardrobe from 1942:

Find more reels and videos on our social media channels! 1949 Wealthier City Girl /Teenager may have had:

The city girl’s clothing lasted longer than a farmer because she had more wardrobe to circulate through, as well as the ability to purchase higher quality garments. Using an inflation calculator USA $1 dollar is about $16 dollars in 2022.  The prices change depending on current dollar values as well as what year you use in the 1940s. For these prices I put in 1944, the end of the war.

With the exception of fabric, you can see the prices of clothing are similar to today’s values. Since fast fashion became trendy in the 1960s, our clothing has become cheaper but also lasts a lot less longer. 1940s clothing, even the cheapest options, were built to last a few lifetimes.

Here are a few examples of clothing costs… We are Debbie and Oscar, your guides to dressing up like decades past. We are here to help you find clothing online and learn about vintage fashions as worn by everyday people, just like you. Need help with your outfit? Ask us anytime.
« Mens Victorian Sweaters & Knitwear | Edwardian Cardigans & Jumpers
1920s Evening Dress Accessories »