Like the 1920s era itself, men’s fashion history of the Jazz Age was driven by youth. Young men returned from the Great War and left the strict dress codes and customs of the Victorian Era.  They took advantage of the newly implemented work-free weekend to relax on the golf course, at the riding stables, or at the lake. Three-piece suits were not at all conducive to a leisurely picnic in the park or a morning on the tennis court.

Young men scoffed at the older generation’s tailored suits with their tight, stiff shirt collars that forced them into the proper gentlemanly posture. In fact, the debate over the stiff versus soft collar was so crucial to men’s fashion of the era that the fashionable Andre de Fouquieres, considered the “Beau Brummel of modern France,” rejected the notion of abandoning the stiff collar as “pure madness.” Eventually, soft attached collars won out. Suits were still worn, but they were simpler. The desire for soft collars also brought a desire for softer fabrics and brighter colors. F. Scott Fitzgerald, known as a bit of a clothes hound, wrote of Jay Gatsby impressing Daisy and Nick with his wardrobe:

“…shirts of sheer linen and thick silk and fine flannel, which lost their folds as they fell and covered the table in many-colored disarray. While we admired he brought more and the soft rich heap mounted higher — shirts with stripes and scrolls and plaids in coral and apple-green and lavender and faint orange, and monograms of Indian blue.” “In general, men’s clothing is more definitely standardized than is that of women. Suits are standardized as to color, texture, weave, and cut, so that among the more conservative men the most marked change seems to be from an oxford gray suit and a gray felt hat to a light gray suit and a straw hat. Full expression of a man’s individuality may be given in his selection of neckties.” – Sage, Textiles and Clothing

The influence of sports on men’s fashion of the era cannot be ignored. Golfers Bobby Jones and Walter Hagen lent their style to leisurewear of the ’20s. Tennis star Bill Tilden dazzled with his forehand and his array of v-neck sweaters. College students copied football hero Red Grange’s raccoon coat. Charles Lindbergh started a trend, too, when his solo Atlantic flight sparked a craze for leather jackets. 1920’s Tennis star Bill Tilden a with his iconic sweater

However, no man equaled the influence of Edward, the Prince of Wales. Prince Edward’s rebellious fashion taste influenced millions of men around the world. The gravitation of American men toward color, patterns, Fair Isle sweaters, and the knickers known as plus-fours (which fell four inches below the knee) can all be attributed to the suave prince who would later abdicate the throne for the American woman he loved. For formal evening wear, a top hat and tailcoat was common in the early 1920s. Under the tailcoat, a well-dressed gentleman wore a starched white shirt with pleated yokes, or a shirt with a bow tie and white wing collars. That gave way to the less pretentious tuxedo by the end of the decade. Day suits were dark during the winter months. Color – even pink – was acceptable for a summer suit. Pants were worn high at the waist and it was OK to show off argyle patterned socks in the Jazz Age. Lace-up shoes became quite popular in this era, and a typical casual shoe was either two-toned white and tan or perhaps white and black. Of course, no outfit was complete without a hat. Summer months might call for a Panama or a flat linen cap. Winter months saw fedoras, bowlers, and homburgs. Whatever the choices a man made, his clothes were a reflection of the time: freer, easier, colorful with an expression of his individualism. 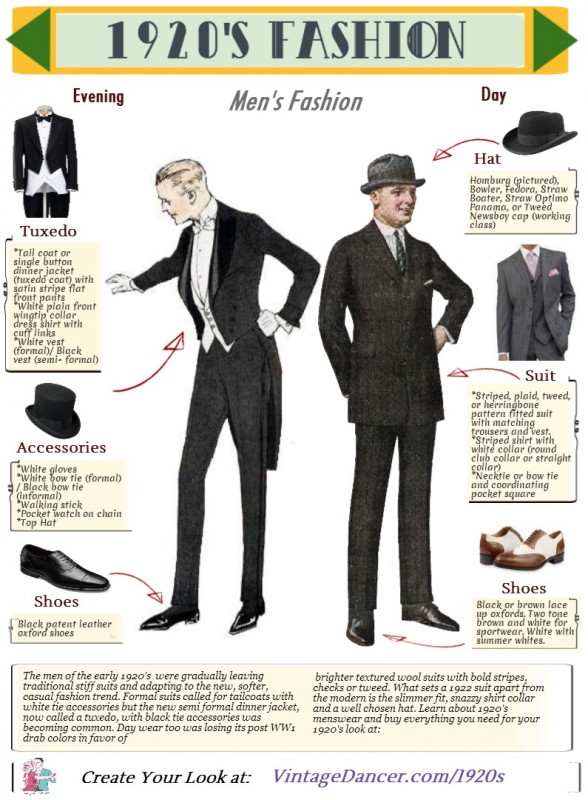 We are Debbie and Oscar, your guides to dressing up like decades past. We are here to help you find clothing online and learn about vintage fashions as worn by everyday people, just like you. Need help with your outfit? Ask us anytime.
« 1920s Women’s Fashion History- Part 1
1920s Patterns – Vintage, Reproduction Sewing Patterns »